Let us remind ourselves of the words of William Carey the cobbler from England who became a missionary and landed in India,

Trusting our living God is serious business. Diane Brown sang at the graduation ceremonies both in South and North India, “How Great Thou Art.” Our hearts were touched and we trembled with holy awe!

What does our great God have for STN after these graduations?

Breaking news: J. S. reports that 30 pastors are gathering from January 24th thru 27th to study course # 1 of BTCP. This is going to happen in a state called Orissa. This is in central India where our team from the US has never been. This means the Lord is leading us to an entirely new place. Not just that, Odisha (new name for Orissa) is the place where Graham Stains and his two kids were martyred. This is one of the most backward states of India and heavy persecution of Christians has been taking place. We are seeing multiplication of the work. Can you sing, “How great Thou art”? 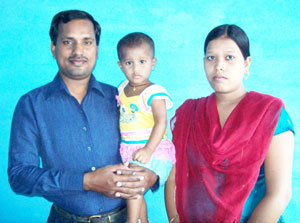 D. and his family

Breathtaking news: D., who was instrumental in starting church plant couple of days after his graduation, informed me on January 17th that a son in the family who gave his house to hold worship services has become seriously sick. He gave up drinking because of the message of the Gospel presented to him. But one week later unable to resist his pangs he took a drink and got sick. He threw up liters of blood on Sunday/Monday night. He was troubled to the point of death. People prayed. Another graduate named Avadesh, who is pastor at another place, began praying and fasting for three days. KB was informed to pray. All prayed. The situation was desperate for D. because it was a challenge for the faith of all the newly born again members of the newly formed church. All are from Hindu background. The guy who was sick was taken to the hospital. Amazing! God answered prayers. Doctors checked and found out that all his internal organs are okay except his lungs. He was treated and sent home. He became completely well. D. further said how this group of people collected about $500 to take care of this sick person. Displays of this kind of Christian love are unusual. God used D.’s testimony of belonging to the Lord and his commitment to motivate others to do it. Can you sing, “How great Thou art”?

Blissful news: KB called a week ago to inform me that he was in Nepal on Christmas day. 200 people gathered for the celebration. This included people who were opposed to Christianity. These opposition people applauded the celebration and enjoyed it thoroughly. While KB was away in Nepal 200 people attended the Christmas service at his home church in Unnao. This gathering included a politician whose party is against Christianity. Surprisingly this politician was spell bound as he enjoyed the whole Christmas service. Can you sing, “How great Thou art”?

By faith we look forward to greater happenings.

Latin America Trip, May 2022 One of The Bridge … END_OF_DOCUMENT_TOKEN_TO_BE_REPLACED